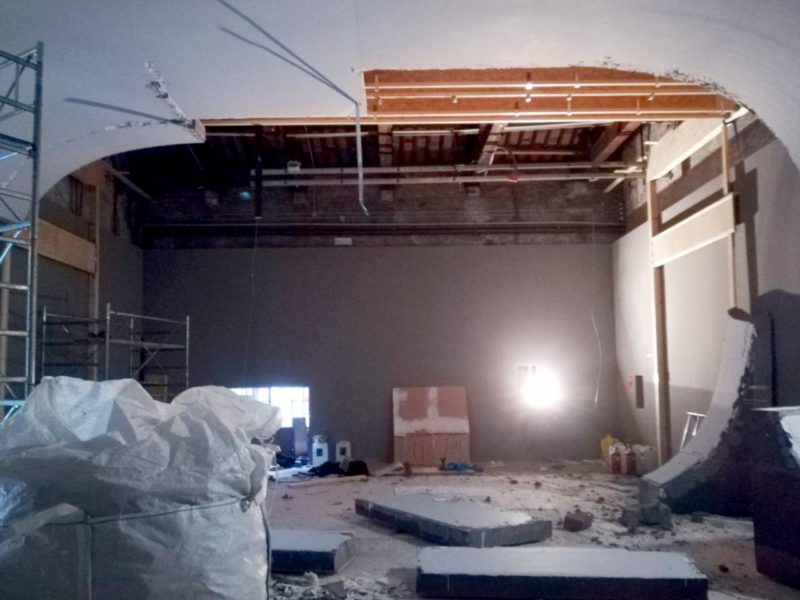 Dorte Madrup, a Copenhagen-based studio of Danish architects, was present at the 2018 edition with an installation that made headlines.
The Venice Biennale presented it like this:

“A work that reflects many of the values expressed in the FREESPACE manifesto, the extraordinary Icefiord Center in Greenland, is a project that faces the most extreme challenges in terms of climatic conditions, a building with enormous expectations in terms of ambition and function. The historical relevance. of the place, combined with the creation of a habitable space dedicated to social interaction within a “superpower of nature”, has produced a project that is solid enough to rest lightly on the ground and exert a singular poetic presence. “ (cit. link)

And the installation was also poetic: a gigantic and white ovoid shell, a room within a room, perfectly soundproofed, located between the Corderie and the Artillery of the Venice Arsenal.

When, in charge of the disassembly, we began to study the projects and discover the materials of which the work was composed, however, we realized a fundamental element that could have compromised the character of sustainability that had so far characterized it.
In addition to potentially reusable wooden beams and panels, a large part of the pavilion was made up of enormous shaped blocks of polystyrene, for a total of over 200 cubic meters, glued together and with other different types of materials, at heights that could reach 6 meters. A ‘standard’ dismantling could only have produced a considerable quantity of mixed waste, classified as undifferentiated and as such very expensive to dispose of.

The only viable solution and which, in contrast to the other proposals received up to then by the curators, would have saved that imposing mass of materials from being burned in incinerators – and produce dioxin -, was to select, differentiate and clean every single element, to facilitate recycling.
Only in this way were we able to enter into an agreement with an important company in the sector, the Politop srl , allowing them to process that polystyrene in their machinery in order to produce new raw material. Dirty, mixed and bulky materials can compromise expensive equipment and return an impure and, as such, useless final product.

Everything is fine when it ends well, but to pollute less you have to work harder, in every sense.
It is necessary to arrive prepared for the final stages of such important temporary exhibitions and to foresee, prevent any waste or expensive disposal from an environmental point of view, adopting new design and construction strategies that encourage and facilitate the reuse of one’s installations.

BUILDING KNOWLEDGE in Venice – Architecture Biennale 2016 | An example of sustainability